The Celli family, paying always particular attention to the genetic, historical and gastronomic heritage of the Montefeltro area, trades adult bovines of PGI marchigiana breed, coming from the single farm of Pietro Grazia in Perticara, who has a long collaboration with the Celli family.

In 1997 Celli's company and Pietro Grazia agreed upon to develop a two row supply chain of marchigiana cattle breed.
The choice to specialize removing other crossbreeds raised doubts and concerns in Pietro Grazia because it was an expensive and long term commitment, by the way there was a realization of a safe quality product and the guarantee of the purchase of all the bovines to Celli's company.
The first 10 cows were bought in Urbania and the bull picked out in a genetic Centre in Perugia.
Thanks to almost 10 years of hard work, today the company has two stables: one with 60 brood cows and 2 breeding bulls and the other one for the fattening of calves and steers.

Animals grow freely grazing from April to November in a area of 35 hectares in the mineral park of Perticara and they are fed with no GMO and farm products , the 70% of them coming from own production . The certified animals always live in the council area of Novafeltria , where they were born and reared until the sale . The slaughtering takes place in the closing municipality of Talamello , in the municipal slaughterhouse that has the EC mark. 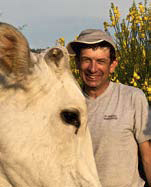 In 1964 the sulfur mine of Certino closed, Pietro Grazia bought "Scandolaio" a farm holding with a small country house and 15 hectares of farmland in the area of Miniera of Novafeltria.
Grazia began his activity with a small stable renovated by Domenico, a barn for fodder and cereals and 10 red pied Simmenthal cows.
He produced milk, hay, cereals, cheese for family consumption and sometimes he sold some calves.
Even then,one of the buyers was Agostino Celli, the patriarch of the family that today manages "La Bottega della Carne " in Novafeltria.

The period from 1982 until 1995 had not been easy for the Grazia's.
Pietro since he was a boy, collaborated in the family activities working in the countryside while his parents worked in the stable.
Because of his father serious health problems, Pietro had to choose between closing the activity or dedicating full time to the company with his wife.

Obviously he chose the second one and since 1990 he decided to extend and modify the structures improving cattle farming from 15 to 40 heads of cattle and passing from the fixed housing system to the mobile one. 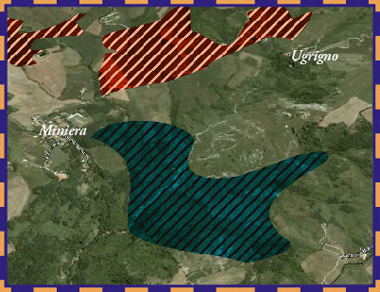 Domenico Celli such as his father , continued cooperating with Pietro encouraging the close cycle breeding with animals that were born and raised in the farm.

Additional investments in the house, in the barn , in another stable with external boxes to leave animals free to go out and , in breeding bulls , put at risk the activity because its benefits were not sufficient to cover debts and family costs.

The partnership with Domenico Celli for the production of PGI (Protected Geographical Identification) Marchigiana cattle breed disclosed as a powerful resource.