Since 1959 the Celli family is specialized in meat

The family's patriarch, Agostino Celli, was a farmer in Novafeltria, in Pian del Bosco farm that was also a bull stud farm. In 1959 he opened Celli's macelleria and norcineria in Novafeltria where he sold meat of the Montefeltro area together with his wife.

In 1982 the son Domenico followed in his parents footsteps by inheriting the activity that to this days he manages with his wife Donatella.
After dismissing the old wood counters with marble surfaces and the old scales, Celli's "Bottega della Carne" moved to a larger shop provided with the most modern technologies in Via VI Novembre, not far from the old shop.
Marco, the son of Domenico and Donatella grew up learning his parents' profession. 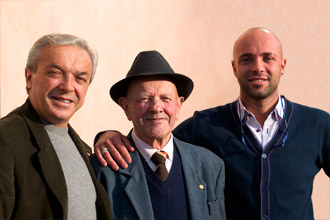 Currently an agreement with Pietro Grazia' s farm in Perticara has gradually allowed to recover PGI marchigiana breed and the forgotten quality of the "Bue grasso" from the Montefeltro area.
Domenico Celli has been promoter of the 1° Meat Exhibition held in Novafeltria and now moved to Perticara.
He also devoted himself to the realization and development of the new community sloughterhouse in Talamello which has EC mark.
On several occasion "La Bottega della Carne" has been indicated by the media as an example of innovative management with regard to the bovine supply chain and it has been awarded in local and inter regional competition for the quality of its meat.
ID-lab creazione siti internet a Novafeltria di Rimini (EMILIA ROMAGNA)
Bottega della Carne "Celli" di Cedrini Donatella - P.IVA 00829890417 - C.F. CDRDTL57C64H949H - SDI: M5UXCR1
Via IV Novembre, 11 - 47863 Novafeltria (Rimini)
Phone: +39 0541 920267 - E-mail: labottegadellacarne@libero.it - PEC: bottegadellacarne@id-postacert.it