After a year of work on a large project, in 2015 we are ready to present a  new patent application filed last October. We shall see the outcome in about  a year time and we hope it will be positive.

Unlike the renowned Mandolino of the Montefeltro, which was an industrial patent application addressed to a specific product, this time the patent application is based on the general system of desalination of cured meats exploiting benefical properties of red wine, precisely Sangiovese wine.

Our traditional ham (then called ... prosciutto diVino) will be the first norcino product to be processed in this way.

It s an heavy and mature bone-in ham, preservatives free and with the only addiction  of salt.

We place ham in an oak Barrique and we keep it immersed in wine (by osmosis wine eliminates part of the salt of the ham)  for months or weeks according to the maturing period and the weight of the ham. The wine used is not a  common one, but the Superior Sangiovese "Scaby" of the Azienda Agricola S. Valentino located in San Martino in Venti (RN), which follows the natural method promoted by the French agronomist Michel Barbaud.

We obtain an ham  of a purplish color externally, due to the red wine's noble and preservative properties, while it preserves intact and natural colours internally. On the palate it reveals a  soft sapidity accompanied by a delicate aftertaste.  And  then, not least, our arteries thank us.

The first official presentation to a public  of the Italian and  French enogastronomic world, was on the Last  February 8th , in the beautiful Villa Castelletti in Florence.

The second event was on 26 th  February in the wonderful and surreal S. Leo, it was tasted by "friends" , in the Osteria La Corte Berengario II.

The official presentation abroad will take place in three evenings in the renowned restaurants and bistrot of Riccardo Lucque, the well known chef now living in Prague.

Finally, with pleasure, in the  evening of  25 th March 2015, in Prague, the prosciuttodiVino will participate  to the event of selection of Miss Czech Republic 2015.

This is also the Montefeltro! 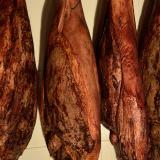 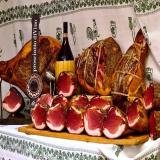 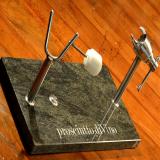